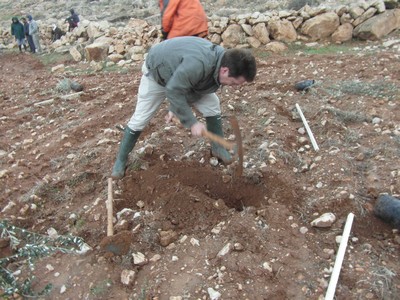 In 2012, St. Mary's Church at Iffley, Oxford in the UK, adopted the Olive Tree Campaign for its annual Harvest Appeal. Just under GBP 12,000 was raised, which funded 840 trees. In addition three parish members joined a group of 40 internationals for the annual Olive Planting Program in February 2013 organized by the JAI / ATG.

"We were delighted to assist with planting some 1,500 trees, over the course of four long morning sessions, for farmers whose land is threatened by encroaching settlements. We were also able to witness the occupation in the West Bank and the difficulties it imposes on so many aspects of Palestinian's lives. In sharp contrast we enjoyed the openness and friendliness of the people we met, experienced their rich culture and cuisine and learned of their long history of endurance. We really appreciated the opportunity to support them in - Keeping Hope Alive in Palestine. Do consider joining us in February 2014".