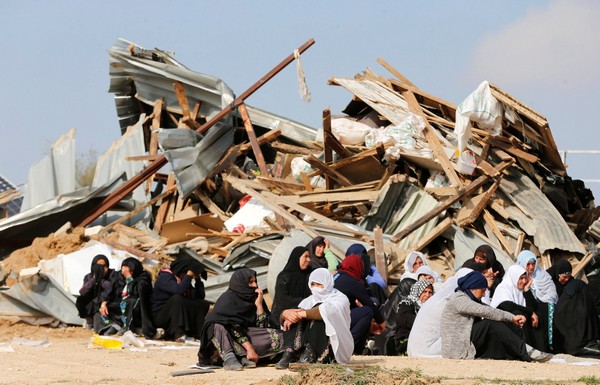 Women sit next to the ruins of their dwellings, which were demolished by Israeli bulldozers, in the tiny village of Umm Al-Hiran, in January 2017. Credit: Ammar Awad/Reuters

The residents of the Bedouin village of Umm al-Hiram, who are Palestinian citizens of Israel, lost their battle with Israel to receive recognition for their village so they could receive water and electricity and have paved road. Not only did they lose this battle but they were coersed into signing an agreement with the State to evacuate to a nearby town. This will be their second Nakba because the Jahahlin were evicted already from the Naquab (Negev) in 1951. Their village, just a few kilometers from Jerusalem, and across route 60 from the ever expanding settlement of Male Addum,im and Kfar Addumim, will be demolished and a new town for religious Jews, called Hiran, will be built in its place. Their fate hangs in the balance now with the Supreme Court who will most likely condone the demolishment of the school made of tires and mud and the evacuation of the village. There is no hope for a judicial outcome that will allow the Bedouins to stay just a prolonged delay. This is one example of what Palestinians mean when they say the Nakba never ended or that it is ongoing.

In the Occupied Territories of the West Bank and East Jerusalem, Palestinians feel the Nakba every day when they cross a checkpoint or watch a new settlement being built on their confiscated land. Farmers of the Olive Tree Campaign live the Nakba every time their fields are destroyed or their trees uprooted by illegal settlers or they are unable to get to their fields because of new bypass roads for the ever expanding network of new colonies.

As Arab Kinneset leader Ayman Odeh said in a recent Op-Ed piece, "When the Israeli state annexes the West Bank without providing equal rights to the Palestinian residents it won't be a new Nakba. It will be a continuation of the one that has never fully ended."

At age 70, Israel has to do more than acknowledge the Nakba. They must end it. To end it means to fully accept Palestinians as human beings with equal rights protected by humanitarian and international law.

JAI asks it partners and friends to support Palestinians in demanding their right to self determination and their right to return to their homes or to receive restitution or compensation for their losses. The International community must recognize and hold Israel accountable for over 8.26 million of 12.7 million Palestinians being forcibly displaced from their homes. We ask you to put political, social, and economic pressure on Israel to end not only the 51 year old occupation but the ongoing settler colonial regime that is creating a Jewish State at the cost of Palestinians loss of dignity, freedom, and justice. Commemorate this year's 70th Nakba by making a commitment to end it.