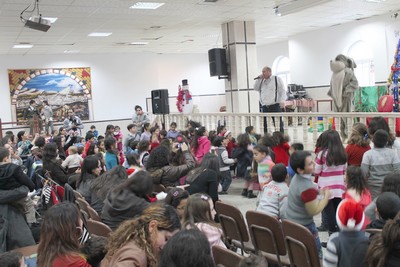 See more photos of the festival

For the 5th year in succession, the JAI and the Palestinian Center of Rapprochement (PCR) organize the Shepherds Nights' Festival in Beit Sahour, the town of the shepherds, celebrating Christmas time. This year the festival lasted for two days the 24th and 25th of December 2012.

Day one was mainly for children, started with a show with Rony Rock band that came from Galilee who did entertainment show, dances with the children, and some Christmas carols. Following was Diyar theater band who preformed the funny Christmas play "Rice and Fanta @ the Academy of Santa", which tells the story of Santa teaching two kids to deliver gifts, in order to deliver them to the Children of Gaza and all Palestine. At the end, gifts Santa distributed gifts to all children who were around 400 and attended with their parents. 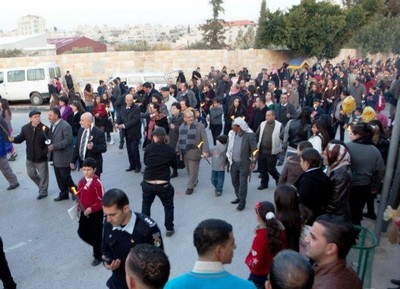 On the following day, Christmas day, afternoon, a candle procession was organized that started from the Orthodox Shepherds field, entitled: "Light a Candle for the Palestinian Rights", calling for the accomplishment of Palestinian Rights according to the International Human Rights and International Law. The procession marched towards to town old city center, where the participants and audience listened to Christmas carols by Sharkiyyat (Eastern) band.