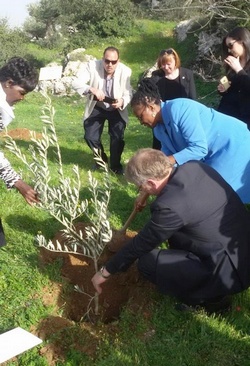 See more photos of the event

On March 8th 2015, the National Coalition of Christian Organizations in Palestine (NCCOP) organized a one-day visit for the World Council of Churches Pilgrimage for Justice and Peace in Bethlehem that included Rev. Dr. Olav Fykse Tveit, the General Secretary and some staff and Central Committee Members of the WCC.

The group visited the Church of Nativity and the Cremisan Area where they had a presentation about the Israeli plans to build the apartheid Wall and confiscate more land from the people of Beit Jala. The General Secretary of the WCC and the other delegates planted two olive trees in the area as Trees of Life and Hope. Later the group visited Aida Refugee Camp and the Sumud House Wall Museum and listened to presentations about the living conditions and aspirations of the Palestinian refugees and about personal reflections related to the Wall written by locals and internationals and posted on the Wall itself. 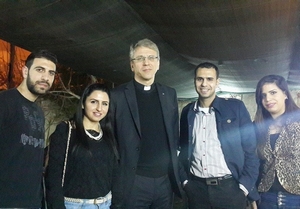 Later the Delegation had a meeting with some NCCOP members including JAI, Wiam and the Arab Educational Institute in addition to the Palestinian Museum of Natural History who shared their concerns and had some discussions . Reflections on the day were made by members of the WCC delegation.

The day was ended with a Reception in the presence of representatives of the NCCOP, churches and other official and civil society groups. The steering committee of the Palestine Youth Ecumenical Movement also attended the reception and had the chance to talk to the General Secretary of the WCC.