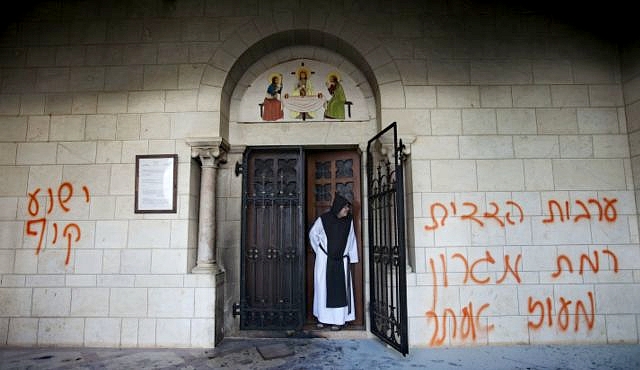 With deep concerns Kairos Palestine heard about the attack on the Monastery of Notre-Dame de Sept-Douleurs. Early yesterday morning, vandals attacked the monastery in Latrun near Jerusalem by spraying graffitis with anti-Christian slogans and torching the wooden door of the monastery.

For the first time, since the Trappist monastery of Latrun was established in 1890, the brothers of the monastery faced an attack like this. At four o’clock in the morning they discovered anti-Christian slogans (like "Jesus is a monkey") and pro-settler slogans in Hebrew, which were sprayed all over the stone walls as well as a torched fire at their wooden door. Based on our communication with one of the monks of the monastery, the brothers are sure that the attack came from settlers.

This assault on a Christian holy site is not the first one. In the last months, Muslim and Christian holy sites in the occupied Palestinian territory as well as in Israel faced terror attacks especially from Israeli settlers and their so called “price tag”-policy.

Kairos Palestine strongly condemns this attack on the monastery. We urge you, our brothers and sisters worldwide, to ask Israel for a response concerning these violent attacks. We urge you to show solidarity with your Palestinian brothers and sisters as well as to raise awareness about the culture of hatred and racism imposed by the Israeli occupation and its consequences for the Christian and Muslim Palestinian population.